International Draughts Federation (IDF) in accordance with the Calendar of the competitions in 2018 holds in Kranevo (Bulgaria) held from 25th August to 4th September 2018 World Team’s Championship in draughts-64. Teams from 14 countries took part in the competitions. Competitions were held separately among men’s and women’s teams in two types of programs: classic and blitz. The teams of Belarus won the Blitz program among men and women. The team of Lithuania won classic program among men and the team of Belarus won classic program among women. See results.

08-09-2018 The World Team Championship in draughts-64 has been successfully completed. Men’s and women’s teams from 14 countries took part in the competitions. 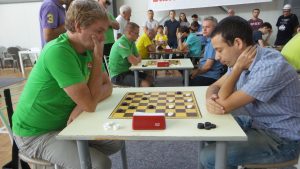 Among the men’s teams after 6 rounds Lithuania leads with 11 points.

Among the women’s teams after 6 rounds Moldova and Belarus lead with 9 points. 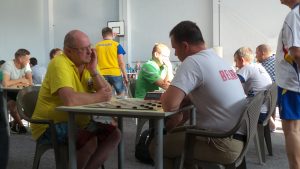 29-08-2018  The classic program started. 11 men’s and 7 women’s national teams take part in the competition. Among the men’s teams Ukraine, Lithuania and Russia are leading with 4 points each. Among women’s teams Israel and Moldova are leading with 4 points each. A significant match was the match of the men’s teams Lithuania-Belarus, which ended with the victory of the baltic men 4-2 (Norvayshas-Valyuk 2-0, Kybartas-Mikhalchenko 1-1, Smaydris-Kondrachenko 1-1). 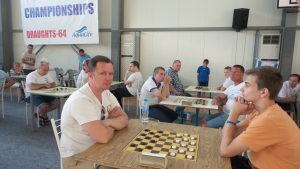 27-08-2018 Blitz program of the Team World Championship was held today. 12 men’s and 9 women’s national teams took part in the competitions.

The second place took the team of Lithuania. The team of Russia was the third. Strongest grandmasters of the world – Arunas Norvaishas, ​​Andrius Kybartas, Sigitas Smaydris from Lithuania, Vladimir Egorov, Dmitry Tsinman, Alexander Getmansky from Russia were the leaders of these teams.

The team of Moldova, lead by world champion Elena Miskova, took second place. The third place was taken by the Russian team.

26-08-2018 Today in Bulgaria in the sports complex “Aqualife” the World Championships in draughts-64 2018 among juniors, youth, veterans, and national teams started.

The opening ceremony was attended by a president of International Draughts Federation Vladimir Langin, a president of Bulgarian Draughts Federation Bogdan Yanev,  a major of Kranevo Rumen Nikolov, a director of sports complex “Aqualife” Armen Yesayan. An international master Anastasia Barysheva performed with song, and the dance group “Jagger” made an incendiary performances.

14-04-2018  International Draughts Federation (IDF) in accordance with the Calendar of the competitions in 2018 holds in Kranevo (Bulgaria) from 25th August (arrival day) to 4th September 2018 (departure day) World Team’s Championship in draughts-64.

Competitions are held with the support of the Foundation for Promotion of Draughts Sports “Russian Draughts”.

One team from each country is allowed to compete in men’s and in women’s championship. Host country has the right to have the second team. One team can be admitted by IDF decision. Men’s teams, which do not have grandmasters in their composition, and women’s teams that do not have masters of sports in their composition, have the right to declare one invited player. The level of the invited player should not be higher than the level of master of sports for men and a candidate for master of sports for women.