International tournament on prizes of the President of the FSHR 08-07-2017  Today at 19.00 was held Closing ceremony for all competitions of International tournament on prizes of the President of FSHR.  See photo. 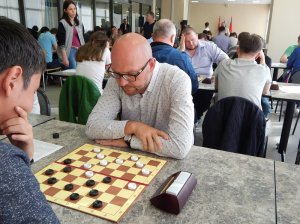 06-07-2017  Rapid was held today. 67 players from 11 countries took part in the competition. Competitions were held on the Swiss system in 8 rounds, according to the system of micro-matches from two games, with time control 8’+ 4″.

The winner of the Rapid became International Grandmaster Vladimir Skrabov. Sergey Belosheev took second place and Oleg Dashkov is on the third place. 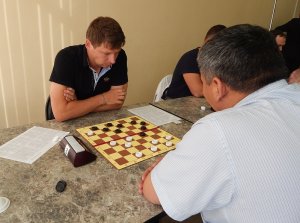 05-07-2017  The opening ceremony of all competitions in Kolomna from 4 to 14 July was held today at 10.00. Within the framework of the competitions for the prizes of the President of the FSHR, Blitz program in Russian draughts was held at 15.00. 76 players from 11 countries took part in the competition. Among them – 14 men grandmasters and 2 women grandmasters. Competitions were held on the Swiss system in 9 rounds, according to the system of micro matches from two games with a new draw of moves IDF.

After 9 rounds the international grandmasters Sergey Belosheev, Gavril Kolesov and Andrey Valyuk scored 15 points and divided 1-3 places. The winner of the tournament with the best coefficient became Sergey Belosheev.

In the classification among women the best woman was the grandmaster from Moscow Tatiana Teterina. International Grandmaster Victoria Motrichko took second place and International Master Sofia Morozova was the third.

Previous Changes in table of draw
Next Russian Team Championship