July, 27 was held blitz tournament on  the Cup of President of the Section-64. 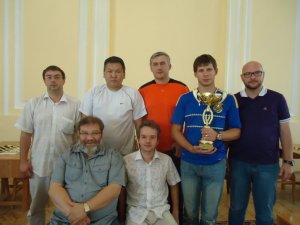 91 participant from 3 counties and 19 sites of Russia taking part in the tournament.

The turnout and registration: July 21, Chigorin club, Bolshaya Koniushennaya str. 25, St. Petersburg, Russia.
Credentials Committee will work July 21, from 14.00 till 22.00.
All participants must have medical insurance for the period of competition.
Opening ceremony July 22, at 11.00
Closing ceremony July 30, at 15.00. Departure of participants from 16.00.

Team results are determined in the youth competitions. The composition of teams: 2 boys and 1 girl.

Competitions in draughts-64 are held in the Russian version of draughts-64 by the system of micro-matches consist of two games with time control 45 minutes till the end of the game plus 30 seconds on each move.

All participants declared by national federations are allowed to participate in competitions «White Nights – 2012».

Applications for participation in competitions must be submitted to the Section-64 until July 4, 2012.

With all hospitality, visa and travel questions please contact: