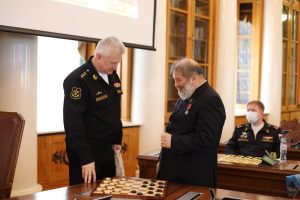 To the 75th anniversary of the Great Victory!

On May 23, in St. Petersburg (Russia), in the building of the Main Admiralty, the main headquarters of the Navy of the Russian Federation (Navy), a session of simultaneous game in Russian draughts, dedicated to the 75th anniversary of the Victory of the Soviet people in the Great Patriotic War, was held.

The session was held on 26 boards: 20 boards in the format of online video conferencing and 6 boards in the offline format. The session was attended by the strongest draughts players of all Navy fleets: the Baltic, Black Sea, Northern, Pacific fleets and the Caspian flotilla. All participants were qualified athletes. Such a draughts event was held at the Navy for the first time.

The session was held for more than three hours and ended in the absolute victory of Vladimir Langin.

By the way, the popularization of draughts among the military has become a tradition. In 2016, the president of the International Draughts Federation (IDF) Vladimir Langin, at the invitation of the head of the Foundation “Russian Draughts”, Alexander Gaidukov, gave a session of simultaneous game at the Russian air base “Kant” in Kyrgyzstan. See more information here

At the air base “Kant” Kyrgyz people played draughts