European Youth Championship 2020 will be held in Kobuleti, Georgia 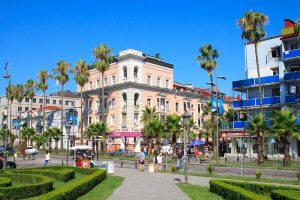 International Draughts Federation (IDF) in accordance with the Calendar of the competitions in 2020 together with Georgian United National Draughts Federation holds from May 2 to May 10, 2020 personal-team European Youth Draughts-64 Championship 2020. Competitions will be held separately for boys and girls in six age groups and in the three types of program: Blitz, Rapid and Classic. Invitation published.

Competitions postponed to a later date.

Personal-team European Youth Draughts-64 Championship will be held at the Sunrise Hotel, 322 David Agmashenebeli str., Kobuleti, Georgia from May 2 (arrival day) to May 10, 2020 (departure day).

Personal Championship is held in the three types of program: Classic, Blitz and Rapid. All programs are held in international (Russian) version of draughts-64 by the system of micro-matches consist of two games.

System of competition (Swiss or round robin) and number of rounds are established by the panel of arbiters depending on the number of participants.

In age groups cadets up to 17 years old and junior cadets up to 13 years old draw of the first move of the white is held for boys and girls. Draw is binding on both games of the micro-match.

In other age groups draw of the moves is not held.

Participants are allowed to participate in the competition, who timely filed an application for participation, registered in accordance with this regulation and paid tournament fee. The number of representing the country participants is not limited.

The organizers provide accommodation and three-time meals from May 2 (starting with lunch) to May 10 (ending with breakfast) one player (boy or girl) from each country in age groups up to 27, 20, 17, 14, 11 and 9 years old (6 participants total).

Their travel costs, as well as costs of accommodation, meals and travel of other participants and coaches paid by their sending organizations or by the participants themselves.

Younger players who perform in older age groups are not provided with accommodation and meals.

Participants who provide accommodation and meals by organizers are required to participate in all three programs: classic, rapid and blitz.

The tournament fee for each participant for participation in two programs: blitz and rapid is 30 euros.

You can go to Kobuleti from the airports of Tbilisi, Batumi, Kutaisi and Yerevan by public transport, taxi or by ordering a transfer.

Applications for participation in the Championship must be submitted to the International Draughts Federation office not later than April 13, 2020 on e-mail: [email protected]. Applications received after the deadline are not considered.

05-03-2020 1st Stage of World Cup 2020-International Draughts-64 Competition “Georgia-2020” will be held  during the European Youth Championship at the Sunrise Hotel, Kobuleti, Georgia from May 4 (arrival day) to May 10, 2020 (departure day). Competitions will be held in two types of program: Blitz and Classic.

The Uzbekistan Team Cup was held in Bukhara

On July 1, in one of the most ancient cities of Central Asia, Bukhara, the …