Registration took place in accordance with the decision of the FMJD Section-64 General Assembly (September 14, 2012, Evpatoria, Ukraine) to give the Section-64 official legal status and to ensure full cooperation with sponsors, government officials and international organizations.

Targeted work for development of draughts-64 in the world will receive a new impetus. The International Draughts Federation will develop different types of games on the 64-square board and expand the geography of significant world draughts events.

Legal registration will significantly simplify the organizational, financial and visa issues, as well as secure the international status of developing versions of the game.

Congratulations to all fans and players of draughts-64, for international organization created and officially registered for unite all those who are really interested in promotion of the draughts on the 64-square board in the world sports arena! 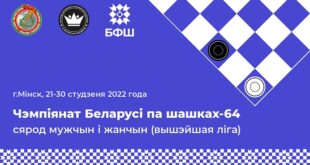 Belarusian Draughts-64 Championship among men and women has started