World Championships 2013 among men and women

You can see information about Championship on the site  www.wc64.org as well. 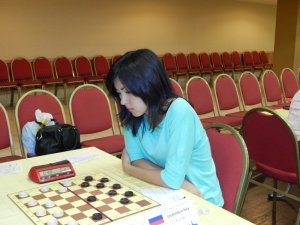 7 and 8 round was held today.
Before the last round in men with a score of 12 points still leads Nicholay Struchkov. Vladimir Egorov, Gavril Kolesov, Andrey  Valyuk and Oleg Dashkov with the result of 11 points shared 2-5 place.
Stepanida Kirillina and Zhanna Sarshaeva lead in women tournament with a score of 12 points. Yulia Makarenkova and Victoria Motrichko divide 3-4 place with 11 points. 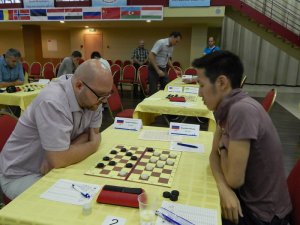 Round 6 was held today.
Nikolay Struchkov won grandmaster Vladimir Skrabov and leading in the men tournament with a score of 10 points.
Oleg Dashkov and Andrey Valyuk won in the 6th round, too. They and Vladimir Egorov have 9 points.

In the women’s tournament Nika Leopoldova  included in a group of leaders, winning Sofia Morozova. After 5 rounds Nika Leopoldova, Stepanida Kirillina and Zhanna Sarshaeva lead with a score of 8 points. 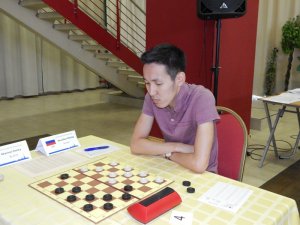 Gavril Kolesov, Andrius Kibartas, Vladimir Skrabov won in the third round, while Vladimir Egorov and Nikolai Struchkov played each other in a draw. Thus after the third round 5 people with a score of 5 points from 6 led the standings. In women after 3 rounds with a score of 5 points of 6 still lead Zhanna Sarshaeva, Julia Makarenkova, Sofia Morozova and catch up with them Stepanida Kirillina, who won in the 3rd round with Ekaterina Ivanova. 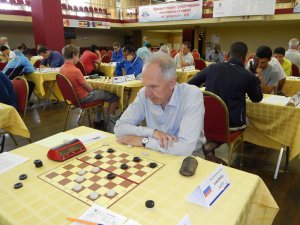 Classic program started today. Unusual results happened in the first round. Gavril Kolesov lost the first game of  micro-match veteran of draughts from St. Petersburg Dmitry Lond. He was able to win in the second game only in the end of the party. Belosheev Sergey and Vladimir Skrabov could not win Mikhail Kiselyov and Novickis Edijus respectively. The other strong players won their rivals. 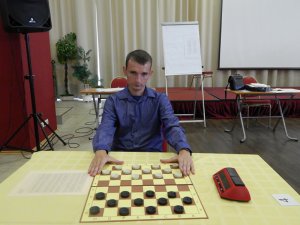 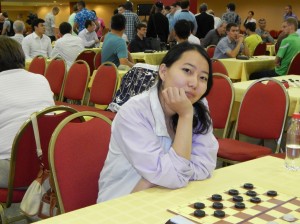 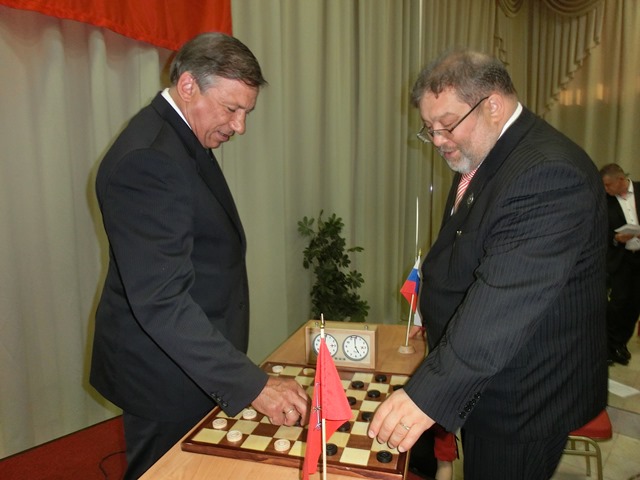 The opening ceremony was held today at 12.00.
Member of the Government of St. Petersburg, the chairman of the Committee for Physical Culture and Sports, Honored coach of Russia Yuri Avdeev;
President of the International Draughts Federation-FMJD Section-64  Vladimir Langin;
Chairman of the Organizing Committee of the competition Alexander  Gaidukov;
Multiple world champion, international grandmaster Anatoly Gantvarg
welcomed the participants of the championship. 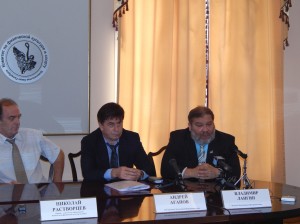 Press conference dedicated to the World Championship in draughts-64  was held July 31 at the Olympic Hall of the Committee for Physical Culture and Sports of St. Petersburg. Representatives of the sports committee, the president of the International Draughts Federation Vladimir Langin, a representative of the Organizing Committee, vice-president of the International Draughts Federation Andrey Agapov, multiple champion and winner of Junior World and European Championships, sports master Ekaterina Ivanova took part in the press conference. I welcome you in St. Petersburg – the city with the rich traditions of draughts!

Draughts movement of Russia began in St. Petersburg. There was published the first book on the draughts. St. Petersburg and Leningrad draughts players have added many glorious pages in the history of draughts sport. St. Petersburg has a lot of experience of the draughts tournaments on the highest level, including the World Championships.

I am confident that the World Championship 2013 will take place in the fascinating, exciting fight and the best players will win, and draughts on the 64-cell board will receive a powerful impetus to its development in the various countries of the world.

I hope that all the participants and guests of the championship will have a memorable stay in our city – one of the most beautiful cities in the
world!
I wish all participants the major sporting and creative achievements!

Greeting of member of the St. Petersburg Government – Chairman of the Committee of Physical Culture and Sports Yuri Avdeev for organizers and participants of the World Draughts Championship 2013

I am glad to welcome in St. Petersburg organizers and participants of the World Draughts Championship 2013.

Draughts has always been popular in Russia, and especially on the banks of the Neva. The founder of the city the Great Peter liked this interesting game. Over the years, Leningrad – St. Petersburg draughts players won titles of champion in the world, Europe, the USSR and Russia. Tournaments of the highest international level are held regularly in the northern capital of Russia.

I am confident that the competition will be held in a fair and uncompromising struggle, and the holders of highest world title will be, indeed, the strongest masters of draughts.

I wish all the participants of the world championship interesting and creative finds, brilliant victories and new sporting achievements!

Member of the the St. Petersburg Government – Chairman of the Committee  Yuri Avdeev