Site of the championship 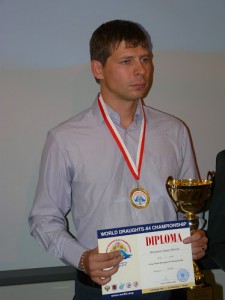 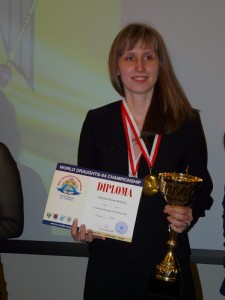 Winners of the World Rapid  Championship:

World Blitz Championship started at 15.00. Competitions are held in the view halls “Berlin” and “Vienna” on the 18th floor of the hotel “Azimut Hotel Saint-Petersburg”.

Opening ceremony of the World Championship was held on October 3 in the great hall “Azimut” at 12.00. At the opening of the championship participants welcomed:
Deputy Secretary of the Russian Security Council Evgeny Lukyanov
Member of the Government of St. Petersburg, chairman of the Committee for Physical Culture and Sport Yuri Avdeev
President of the International Draughts Federation Vladimir Langin
Chairman of the Organizing Committee, the head of the Foundation for development Draughts Sports “Russian Draughts”  Alexander Gaidukov
President of the Russian Draughts Federation Anatoly Nikitin 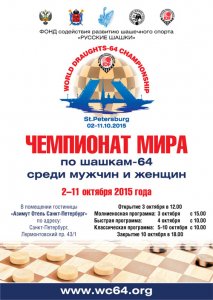 World Draughts-64 Championship among men and women starts after a week. Strongest players of the world from forty-seven countries representing 4 continents: Europe, Asia, Africa and America will take part in the competition.

For the victory in the championship will fight Russian players – the current world champion Nikolay Struchkov and 7-time world champion Gavril Kolesov (both from Yakutia), winner of the World Mind Sports Games 2008 Oleg Dashkov from Samara, multiple world champion, the first world ranking – Sergey Belosheyev (Evpatoriya) and other strongest players.

Surprise of the championship can become talented African players – 18-year-old nugget Enock Makoka Banda (Malawi) and experienced Mvaaza Sakala (Zambia), as well as the first number of Jamaica, 26-year-old Andre Thomas. We look forward to the confident  game of the multiple champion of Brazil, the winner of World Youth Championships Marcelo Francisco.

In women, the favorite of the tournament is the current World Champion Zhanna Sarshaeva from Russia, Astrakhan. The competition for she will make the world champions in different years Elena Skovitina from Moldova and Julia Makarenkova from Ukraine, European champion 2014 in blitz Sofya Morozova from Russia, Kaluga, rapidly progressing young players – Daria Fedorovich and Vera Hvaschinskaya from Belarus, Nika Leopoldova from St.Petersburg.

Geography of participants in female championships expanding rapidly. In the upcoming championships for the first time try their hand a representative of the South African Andrea Bosch. We hope that the participation of African players in major Draughts-64 competitions will cause a large surge of interest in the draughts sport in Africa and new stars will soon shine on the Draughts horizon!

Fans from more than 170 countries around the world watched the events in Draughts-64. We are confident that the time will come when the representatives of all these countries will meet at the largest draughts forum for the Draughts games! 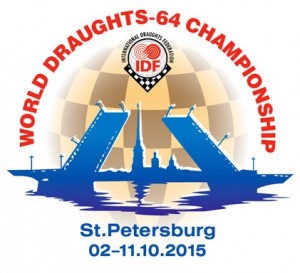 Website of World Draughts-64 Championship 2015 among men and women started its working. You can look the news HERE

International Draughts Federation (IDF) – FMJD Section-64 in accordance with the Calendar of the competitions in 2015 holds from 2nd October (arrival day) to 11th  October (departure day), 2015 World Championships in draughts-64 among men and women. Competitions are held at the hotel «Azimut Hotel Saint-Petersburg» at: Russia, Saint-Petersburg, Lermontovsky 43/1, Site www.otel-azimut.ru

Next competitions are held:

Participants from national federations – members of International Draughts Federation (IDF) are allowed to participate in competitions.

To participate in the Championships allowed:

♦ Participants from each country at the request of national federations

♦ Participants from each country at the request of national federations

Winners of World Championships in Blitz, Rapid and Classic game among men and women are given the title of «World Draughts-64 Champion 2015». They are awarded with cups, medals, official diplomas.

The participants who took second and third places among men and women in each Championship are awarded respectively with cups, medals, official diplomas.

The prize fund of the championship will be at least 3 600 000 rubles (near 64 000 US dollars). Distribution of the prizes – on separate regulations:

On the day of arrival at the competition each participant pays organizational entry fee:

♦ Classic game
120 euros for men, 80 euros for women. Players who took 2nd and 3rd place in the World Cup 2014 allowed without fee according to the Regulations of the World Cup.

Participants who did not pay the entry fee on the day of registration will not be allowed to competition.

♦ World champions 2013 among men and women N. Struchkov and Zh. Sarshaeva;
♦ Winner of the World Cup 2014 V. Egorov;
♦ One participant for men and for women from each national federation – member of International Draughts Federation (IDF).

The costs of their travel and visa, as well as the cost of the other participants are paid by sending organizations (visas, travel, meals, accommodation).

Participants who provide accommodation and meals by the organizers are required to participate in all three Championships: classic, blitz and rapid.

Applications for participation in the Championship must be submitted to the office of International Draughts Federation (IDF) only from national Federations not later than 24th August on e-mail: [email protected], [email protected]

Participants not included in the application of national federations will not be allowed to competitions.

Applications for visas and booking accommodation (up to 24th August) – Antonina Langina, tel. +7 921 7777231, e-mail: [email protected]
In application for visa you need to specify arrival and departure dates, surname, name, date of birth, No of passport, date of expire, date of issue, status (player, coach, accompanying)

The schedule may be changed. In this case, the date and time of registration, opening and closing are final.