General Secretary of Association of Draughts of Malawi (ADMA) Suzgo Alpha Nkhoma sent information on organization and holding of the Malawi National Draughts-64 Championship in 2016-2017.

Malawi has 3 major regions: Southern, Central and Northern Region. The road to the national finals here in Malawi is tough as it starts at district level, then those that qualified at district level progress to Regional level and those that qualify at regional level are the ones that progress to the national finals.Southern Region conducted its tournament on the 26 December 2016. 30 players from different districts competed for National places, only best 10 players progressed to the National finals. International Master Moses Winesi emerged winner of the tournament despite having automatic qualification to the National Finals.Central Region conducted it Regional championship on 31 December 2016. 32 Players from different districts competed and best 10 qualified for the National Finals. IDF Master Enock Makoka Banda emerged winner again despite having an automatic qualification to the national Finals.Northern Region conducted it Regional Championship on 5 February 2017. 20 players competed and 10 players progressed to the finals. Fishani Mbendera emerged winner of the region.32 players will fight in the Finals of the National Championship  inclusive of 2 masters.Finals of the National Championship will be held from 26 May (Arrival) to 29 May (Departure) 2017. Competition will take place in the Capital City of Malawi, Lilongwe at Kawale Lodge. The winner to be crowned IDF Master in accordance with the rules and regulations of IDF and consequently qualify for the World Championship 2017 in Draughts-64.The following players have qualified for the Finals of National Championship: 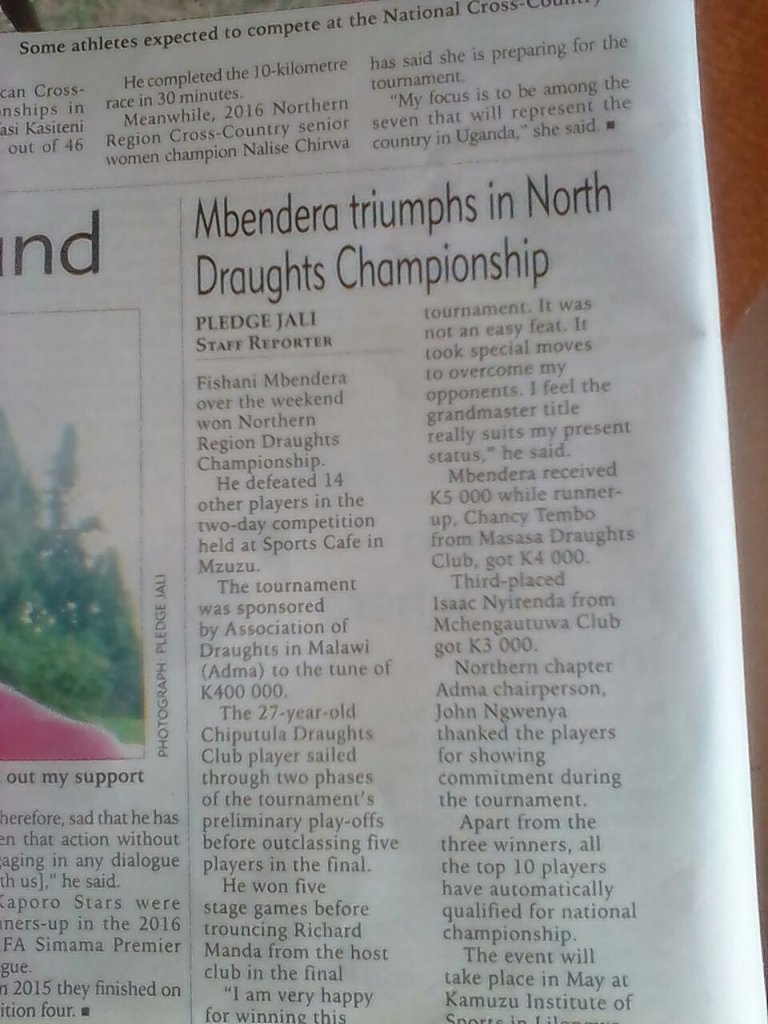