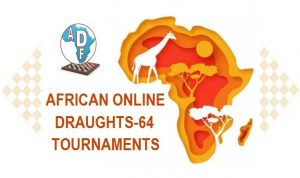 The African Draughts Federation (ADF) is actively involved to host online tournaments for the athletes from African countries.

The African Draughts Federation (ADF) Exclusive Committee at its meeting on 23 August 2020 discussed a number of issues and decided to hold the following online tournaments:

1. The date for African Open Online Championship has been shifted to 11 October 2020. This was done to allow ADF to discuss with potential sponsors the possibility of holding the event at a higher level.

2. ADF has approved a proposal to host the first African Individual Draughts Online League (AIDOL). The rules of the event have been published. The competition will start on September 9th. Registration deadline is September 6th.

3. ADF has further approved to have online Team Tournaments, where national teams will compete. Details will be announced later.

All competitions will be held on the PlayOk online platform.

Previous Online Draughts-64 Tournaments within the framework of the Mind Sports Olympiad 2020 (MSO)
Next Traditional tournaments in Saarbrücken, Germany