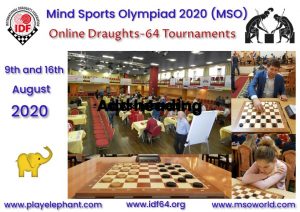 Participants who have not yet registered are kindly requested to register urgently by filling out the Google forms on the IDF website. Pre-registration ends on August 15.

On the day of the competition, August 16, registered participants must follow the link for their tournament published on the IDF website, click on the register button and wait for the tournament start. The tournament will start automatically.

On August 16, the tournaments will be streamed on the www.damki.net YouTube channel.
The stream starts at 17.30 Moscow time.
The guests of the broadcast are international grandmaster Vladimir Skrabov and master of sports, famous coach Artyom Alyoshin.

10-08-2020 Brazilian Draughts Tournaments within the Mind Sports Olympiad 2020 (MSO) are completed. Representatives of 30 countries from Europe, Africa, Asia and Pan America took part in this prestigious competition. This is a great success for Brazilian draughts and for draughts-64 in general.

The best athletes from Africa, Asia and Pan America were also determined.

71 athletes determined the winners in the youth tournament among boys and girls in age groups up to 11, 14, 17 years.

The winners and prize-winners of the youth tournament in various nominations are:

We remind you that to be included in tournaments, registered participants must August 9 follow the link of their tournament (see above), click on the register button and wait for the tournament to start. The tournament will start automatically.

We ask the participants and representatives of the players to check the availability in the lists, the correctness of inclusion in the tournament, data, nicknames, and before 15.00 Moscow time, inform about the absence in the lists, errors and inaccuracies by e-mail: [email protected], [email protected]. Participants who provided 2 nicknames must decide under which nickname they will play. It must be remembered that participants who are not included in the lists will not be able to register for tournaments and take part in them.

08-08-2020  Registration for Brazilian Draughts Tournaments, which will be held on August 9, is ending. Participants who have not yet registered are kindly requested to register urgently.

To be included in tournaments, registered participants must August 9 follow the link of their tournament (see above), click on the register button and wait for the tournament to start. The tournament will start automatically.

Streams will be held during the tournaments:
in Russian on the www.damki.net YouTube channel.
Guests of the broadcast are Grandmaster Yuri Kirillov and National Master Artyom Aleshin
in Brazilian on the lucasmassola YouTube channel and the Augusto Carvalho YouTube channel

07-08-2020 On August 6, another training tournament in Brazilian draughts was held on the Gambler online platform to prepare for the Draughts-64 tournaments within the 2020 Mind Sports Olympiad (MSO).

The winners of tournament were:

05-08-2020 On August 6, another training tournament in Brazilian draughts will be held on the Gambler online platform to prepare for the Draughts-64 tournaments within the 2020 Mind Sports Olympiad (MSO). Registration at 18.30, start at 19.00 Moscow time.

05-08-2020 On August 2 and 4, training tournaments in Brazilian and Russian draughts were held on the Gambler online platform to prepare for Draughts-64 tournaments within the Mind Sports Olympiad 2020 (MSO).

In the Brazilian draughts tournament held on August 2, the winners were:

On August 4, in the Russian draughts tournament, the winners were:

The data must be complete and correct.

For those who have no experience of playing on the Gambler platform, or are not confident in their abilities, the organizers will hold training tournaments in Brazilian and Russian draughts. The competition will be held according to the Swiss system in 9 rounds, micro-matches, 3’+2″, draw of the initial moves. Players of any qualification registered on the Gambler platform with the filled in data are invited.

The Training Brazilian draughts Tournament will be held on August 2 (Sunday), registration at 17.30, start at 18.00 Moscow time. Link to the tournament https://www.playelephant.com/play/769199

After registration on the Gambler platform, players must register on the Google form of their tournament.

As part of the Olympiad, 4 online Draughts-64 Tournaments will be held: open tournaments and tournaments among boys and girls up to 17 years in Russian and Brazilian draughts, as well as an online tournament on Checkers Giveaway (Russian draughts), which will be held on the Vint.ee online platform.

– In youth tournaments, all declared players (boys and girls born January 1, 2004 and later) are allowed.

All participants who are not registered on the Gambler platform must register in advance there.

All participants must indicate on their card the following data: last name, first name, date of birth, title /rank, city and country of residence, coach (if available).

All data must be filled in Latin letters.
The data on the card must be complete and correct.
The International Draughts Federation will check the details of the participants.
Participants with incomplete data or data that will not be confirmed will not be admitted to tournaments.

Registration for tournaments is held in 2 stages.

Participants indicate in Google form for each tournament their reliable data:
last name, first name, date of birth, title/rank (if available), city and country of residence, coach (if available), Gambler nickname (nickname must contain all the participant’s data) and e-mail for feedback.
All data must be filled in Latin letters.

Registration for the tournament

After filling out the Google form and inclusion in the lists of relevant tournaments, participants will be able to register on the day of the game and join their tournament in accordance with the schedule and a link to the tournament.

Links to tournaments will be announced later.

– Places of participants are determined by the highest total points scored.
– In case of equality of points, places are determined according to additional criteria that are used for tournaments on the Gambler platform.
– According to the results of competitions, winners and prize-winners are determined in the following categories:

Winners and prize-winners in all categories are awarded diplomas.
All participants receive commemorative diplomas.
Additional prizes will be announced before the start of the competition.

By registering to participate in the tournament, the participant confirms that he/she will play honestly and will not use any devices, computer programs or other people’s tips for prompting.

Reasonable protests against suspicion of cheating are submitted by e-mail [email protected] within one hour after the end of the tournament.

According to the results of consideration of protests, cheaters can be disqualified without the possibility of appeals.
Their places are excluded from the final distribution of places in the tournament.

For all questions on participation in tournaments you need contact with the IDF office by e-mail: [email protected]

Current information on the organization and holding of the tournaments will be posted on the website of the International Draughts Federation www.idf64.org

Previous Cancellation and postponement of the draughts-64 competitions