Competitions are held in the three types of program: Blitz, Rapid and Classic.

1). Blitz (Brazilian Draughts) – 7 rounds by Swiss system, micro-matches consist of two games with draw according to the official table, 5min + 3s/move for each game.

3). Classic (Russian Draughts) – 7 rounds by Swiss system, micro-matches consist of two games with draw according to the official table, 20 min + 10s/move for game.

All participants must have medical insurance for the period of the competition.

Each participant of the competitions should pay organizational tournament fee at the day of arrival:
60 Euro for adult;
50 Euro for women, veterans 60+, youth 23 year and younger.

Prize fund of the competition is no less than 1500 Euro.

2. 30 € per person per night in double room, ½ board. It includes overnight accommodation, breakfast and a daily meal. Supplement in single room € 15;

3. 40 € per person per night in double room, full board. It includes overnight accommodation, breakfast, lunch and dinner. Supplement in single room € 15;

4. All reservations to this hotel are made by the F.P.D. (Portuguese Draughts Federation).

To Lisbon and back by plane and Lisbon-Setubal/Setubal-Lisbon by bus.

Transport from Lisbon to Setúbal (35 Kms)
Airport – Gare Oriente (Taxi) 5 minutes or bus no. 705 or 208 (ten minutes). The better is the taxi due to luggage.
Gare do Oriente to Setubal.  Bus schedule  HERE
Applications
Applications for participation in competition must be submitted not later than May 07, 2016 to the office of International Draughts Federation on e-mail: [email protected] and to the organizers on e-mail: [email protected]

Applications for obtaining visas (up to May 01, 2016) and booking accommodation (up to May 07, 2016) must be submitted to the organizers on e-mail: [email protected].

Copies of applications you need to send to the office of International Draughts Federation on e-mail: [email protected]

Dmitry Tsinman “Without a doubt, the 1st stage of the World Cup 2016 in draughts-64 was organized and was held at the highest level. It is encouraging that in addition to the great role of Vladimir Langin and his team’s active role in creating a comfortable environment for games, as well as for the organization of the cultural program, have played, and representatives of the Portuguese Draughts Federation. With their attitude to the tournament, representatives of the National Federation and its ordinary members have once again proved that the International Draughts Federation made the right choice in favor of Portugal, making the World Cup in this country the traditional!”

The Portuguese Draughts Federation, whereas all its members without exception, expressed his eternal gratitude to IDF for his contribution in the Organization of the event “1st Stage of World Cup in Draughts-64, Setubal 2016”, which ran without unexpectedness and in an exemplary manner by all the participants of various parts of the world. 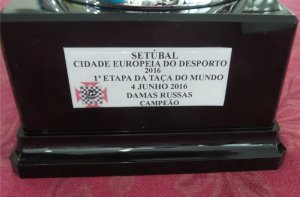 03-06-2016  Classical program of the 1st stage of the World Cup is finished. 12 points scored Dmitry Tsinman, who played in the last round in draw with Damir Rysaev and Vladimir Skrabov, who won Andrey Gnelitskiy. The fate of the first place decided by additional criteria, which were better for Dmitry Tsinman. Third place with a score of 10 points took Damir Rysaev.

03-06-2016  Before the last round with a score of 11 points standings headed by Dmitry Tsinman, who won in the sixth round Oleg Polikarpov. Vladimir Skrabov with a score of 10 points  is on the second place. He played a draw with Damir Rysaev, which is located on the third place in tournament table with a score of 9 points.  Standing after 6 rounds 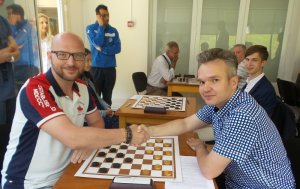 02-06-2016   After 5 rounds of the classical program with a score of 9 points from 10 leading international grandmasters Dmitry Tsinman and Vladimir Scrabov. They made only one draw each other. Damir Rysaev have on one point less. By 7 Points have Andrey Gnelitsky, Oleg Polikarpov and Ekaterina Ivanova.
These players will compete for victory in the remaining two rounds of the tournament. Сomments of Andrey Gnelitskiy on the games of classical program HERE     Standing after 5 rounds 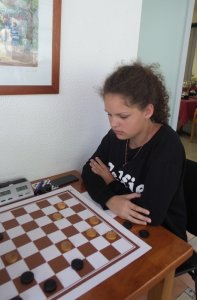 01-06-2016  This morning, participants of the tournament visited the National Nature Reserve and the resort town of Troy with the famous 60 km long beach, located on the Atlantic coast.  PHOTO

After lunch, classical program in Russian draughts started. Competitions are held on the Swiss system in 7 rounds. Players play each other 2 games with the draw of moves and positions, obligatory for both games of the micro-match. According to the schedule 2 rounds were held today. After two rounds the standings are headed by young Svetlana Streltsova and international grandmasters Vladimir Skrabov and Dmitry Tsinman.  Standing after 2 rounds 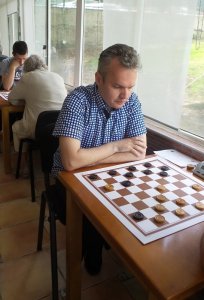 Blitz in Brazilian Draughts started at 15.30. The competition started with a birthday cake congratulations of international grandmaster Vladimir Skrabov with his birthday. The competition was held on the Swiss system in 7 rounds. Players played 2 games with each other with the draw of moves and positions, obligatory for both games of the micro-match.  International Grandmasters Dmitry Tsinman and Vladimir Scrabov came to the finish with the same score. Additional criteria were better for Dmitry. Thus the champion of Blitz become Dmitry Tsinman, Vladimir Skrabov became the second, Andrey Gnelitsky took third place.    Table     PHOTO 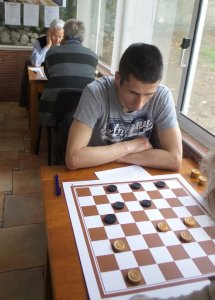 30-05-2016  Rapid in Portuguese Draughts was held today. The competition was held on the Swiss system in 7 rounds. Players played 2 games with each other in the classic draughts without the draw of moves. As expected, the Portuguese players were ahead. 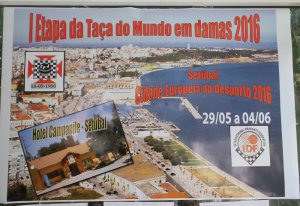 29-05-2016 On the 1st stage of the World Cup 2016 – International competition “Portugal 2016” in the city of Setubal, accepted European City of Sport 2016, arrived 35 participants from Portugal, Russia, Germany, Poland and Angola.

Opening of the competition was held today. Participants were welcomed by representatives of of City Hall and of the Municipality of Setúbal.

The competition traditionally began with the match on 12 boards in Portuguese Draughts between the Portuguese national team and the team of the world.   Table     PHOTO

Such match is held for the third time and for the first time world team won with a score of 13 : 11.