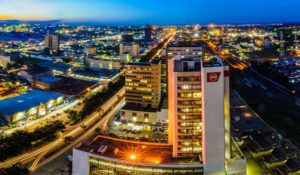 Zambia Draughts Federation (ZDF) 2018 National Draughts-64 Championship which is held once per year and this year it was conducted from 30th March, 2018 to 2nd April, 2018 at Justin Kabwe Primary School in the capital of Zambia, Lusaka under the supervision of Mr. Raphael Phiri as Tournament Referee together with the Zambia Draughts Federation National Executive Comiittee. The championship was the qualifier for the African Championship 2018. Elias Munkondia became Zambian National Champion 2018.

PURPOSE.  The main purpose of the Championship 2018 was:

i. Come up with the Zambian National Champion for the year 2018
ii. Come up with a team of six (06) best Zambian players, who shall represent Zambia at the forth-coming African Championship to be held in Malawi from 8th to 14th of July, 2018.

The tournament was held in two phases and that is:

– Phase One were all thirty four (34) participating players played Pool Checkers using the Swiss system and out of which only twelve (12) players qualified and were selected to the final stage.
– Phase Two was the final tournament of twelve (12) players was fully played in Russian Draughts using random openings and on round robin basis (totaling 11 rounds) of which the group winner became Zambia Draughts National Champion for the year 2018 while the other five (5) runners up qualified together with the Champion to the forth-coming African Championship to be held in Malawi from 8th-14th July, 2018.

The tournament was exciting as strong Zambian players participated and it were also covered by the Zambia National Broadcasting Corporation (ZNBC) on television coverage.