01-09-2017  Classic program of the World Seniors Championship in draughts-64 is completed.

International grandmaster from Lithuania Arunas Norvayshas won the championship. Yuri Kirillov (Israel) is the best in the standings (60+). Yulia Kuznetsova (Russia) became the best among women.

It is noteworthy that the third place among women was taken by a famous sportswoman, ex-champion of the USSR among women Lyudmila Petrova, who turned 80 in August 2017.

Photo from the championship and photo from closing ceremony are published in the section World Youth Championship HERE.

26-08-2017  Classic program of the World Championship among veterans started. 20 players from 10 countries take part in the competition. Among them are international grandmasters – current world champion in Rapid Arunas Norvayshas and ex-world champion Ion Dosca (Moldova). 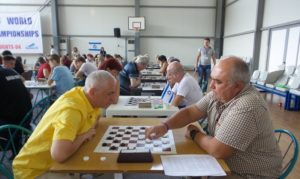 All types of the program will be played with draw according to the official table (745 positions).
System of competition is Swiss or Round robin, depending on the number of participants.

All participants claimed by national federations are allowed to participate in World Seniors Championship.

Each participant of the competitions should pay at the day of arrival organizational tournament fee: 40 euros. The participant who has paid the fee, are eligible to participate in both programs: classic and blitz.

Hotel accommodation is in 2-3 bed rooms with facilities in the room. Rooms will be booked in the order of receipt of applications. All participants must residence in Sports Complex “Aqua Life” from August 23, till September 02, 2017. In case of violation of this paragraph penalties can be applied.

All costs for participation in competitions are paid by participants or sending organizations.