Competitions were held on the international version of draughts-64 (Russian version).
Organizers: Belarus Draught Federation (B.D.F.) and The International Draughts Committee of the Disabled (I.D.C.D.). 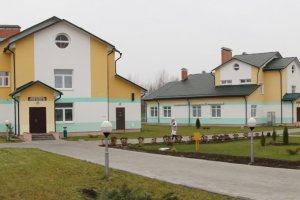 10-05-2017 On May 7, 2017 the Board of the International Draughts Committee of the Disabled (I.D.C.D.) visited the Gomel Boarding School for Disabled Children with Peculiarities of Psychophysical Development. According to the decision of the I.D.C.D. Board, from now this school is taken patronage. Leszek Pętlicki (I.D.C.D. President), Alexander Beliakov (I.D.C.D. Board Member) and Stanislav Kostikov (photographer) visited the intrernate school and presented 20 sets of draughts inventory. Also, according to the decision of the I.D.C.D. Board, the head of the Draughts Club, Honored coach of the Republic of Belarus Anna Barashko will receive bonuses (grants) from the I.D.C.D. Board. Detailed information about the event  HERE

08-05-2017 European Draughts-64 Disabilities Championships ended. Within the framework of competitions two programs were held: with classical control and Rapid program.

Absolute winners in the Rapid program were:
Ivanov Kyrylo (UKR) in men and Gataullina Eldyz (RUS) in women.

The Uzbekistan Team Cup was held in Bukhara

On July 1, in one of the most ancient cities of Central Asia, Bukhara, the …