International Draughts Federation (IDF) together with Portuguese Draughts Federation in accordance with the Calendar of the competitions for 2018 from November 3 (arrival day) to November 10, 2018 (departure day) holds in Portugal 5th stage of the World Cup 2018 in draughts-64 – International competition “Portugal-2018” and other events in draughts-64.

Date and Venue of the competition

All participants regardless of gender, age and rating are allowed to participate in the competition who timely filed an application for participation, registered in accordance with this regulation and paid the tournament fee. The number of participants representing the country is not limited.

Competitions are held on the official rules of the IDF.

System of all programs is Swiss.

Classic and Blitz program are held by the system of micro-matches consist of two games with the drawing according to the official table (745 positions), obligatory in both games of micro-match.

Rapid program will be held under a separate regulation.

As part of the competition, match in Portuguese draughts: the Portuguese national team against the world team will be held on November 3.

Places of players in each program are determined by the biggest amounts of points. In case of equal points of two or more participants the additional criteria are established by the panel of arbiters according to the regulations of the competition.

In each program winners among men, women and juniors up to 20 year (1999 year born and younger) are determined.

Accommodation of all participants is in the hotel Inatel in Oeiras: Alto da Barra – Estrada Marginal, 2780-267, Oeiras, Lisbon (Portugal). http://www.inatel.pt/Fundacao/Onde-ficar/Praia/INATEL-Oeiras/INATEL-Oeiras.aspx  Reservations of rooms are through the Portuguese Draughts Federation.

The tournament fees must be transferred to the account of the Portuguese Draughts Federation IBAN PT50 0035 0278 0000 3294 8303 4 no later than September 30, 2018.  If payment to the account is not possible, tournament fees must be paid in cash on the day of registration on November 3, 2018.  In case of bank transfer, payment receipt must be presented to the credentials committee.

Applications for participation must be submitted to the IDF office not later than September 30, 2018 on e-mail: [email protected] 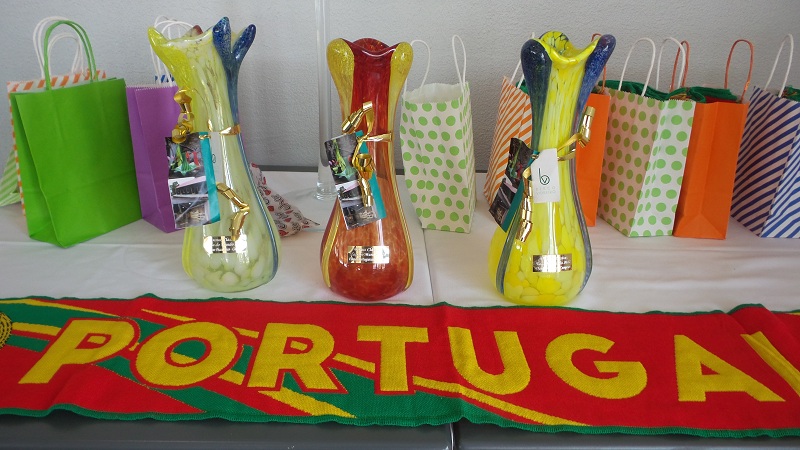 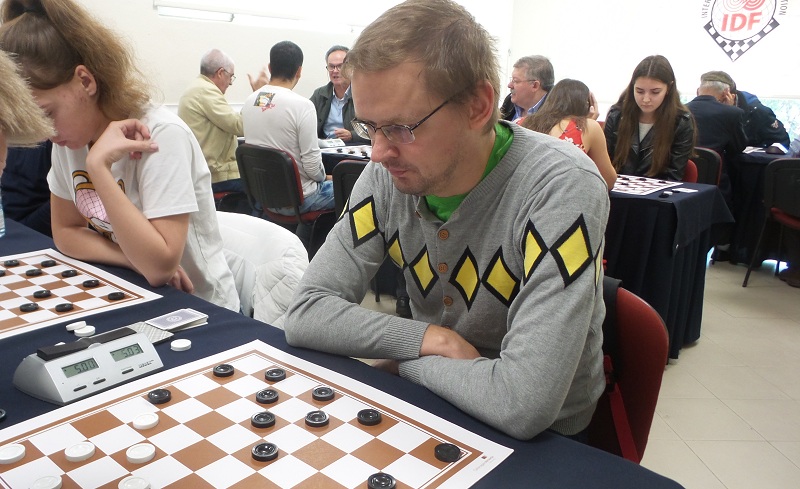 09-11-2018 In the final round of the classic program, the international grandmaster Andrius Kybartas (Lithuania) beat Dmitry Melnikov and, with an absolute result, became the winner of the tournament. International master Dmitry Ganopolsky (Israel) took second place with 10 points. IDF master Anna Filipenko (Russia) is in third place. She has 9 points. 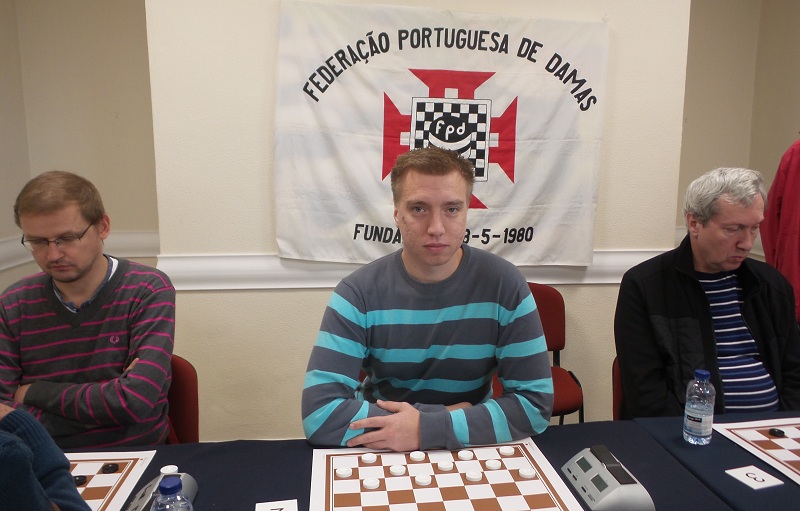 05-11-2018 Blitz program was held today. Competitions were held in Brazilian draughts, the Swiss system in 7 rounds, a micro-match of 2 games, time control 5 minutes + 3 seconds for each game. 21 players from Portugal, Russia, Lithuania, Israel, Spain and Brazil took part in competition. 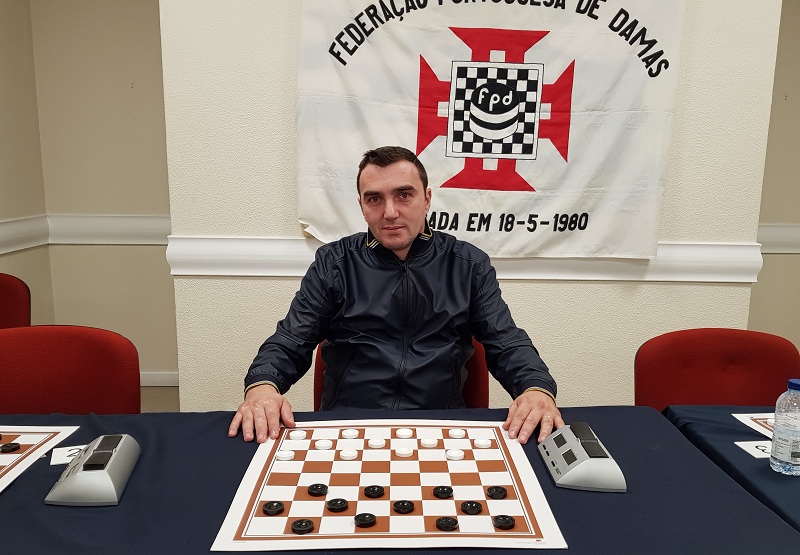 04-11-2018 Rapid program was held today. Competitions were held in Portuguese draughts, on the Swiss system in 7 rounds with a time control of 20 minutes for 2 games. 24 players from Portugal, Russia, Lithuania, Israel, Spain, Mozambique and Brazil took part in competition.

The winner of the tournament with a score of 6 points out of 7 became the national grandmaster from Portugal Nuno Viera. International master Dmitrii Melnikov (Russia) with 5 points took second place. In third place with 5 points, but the worst coefficient is Luis Sa (Portugal).  See the results. 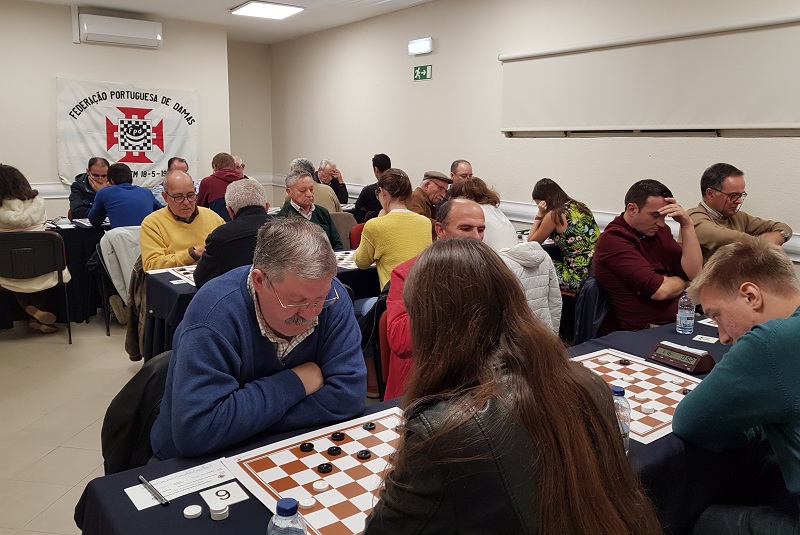 03-11-2018  The 5th stage of the World Cup 2018 – International competition “Portugal-2018” started today in Lisbon. At the opening of the competition president IDF Vladimir Langin and president of the Portuguese Draughts Federation Arlindo Roda congratulated the participants with the start of the competition.

The competition began with a traditional match in Portuguese Draughts: Portugal against the whole world. The match was conducted on 13 boards. Portuguese team won with the score 19:7.

Results of the match HERE

18-06-2018 International Draughts Federation together with Portuguese Draughts Federation in accordance with the calendar of the competitions 2018 holds in Portugal following events in draughts-64:
1. Training events with participation of the strongest players of the world from 27th October to 2nd November 2018;
2. 5th Stage of World Cup 2018 in draughts-64-International competition “Portugal-2018” from 3rd November (arrival day) to 10 November, 2018 (departure day).
3. Match in Portuguese draughts: the Portuguese national team against the world team, November 3, 2018.

The prize fund of the 5th stage of World Cup will be at least 2000 euros.