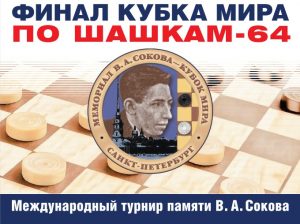 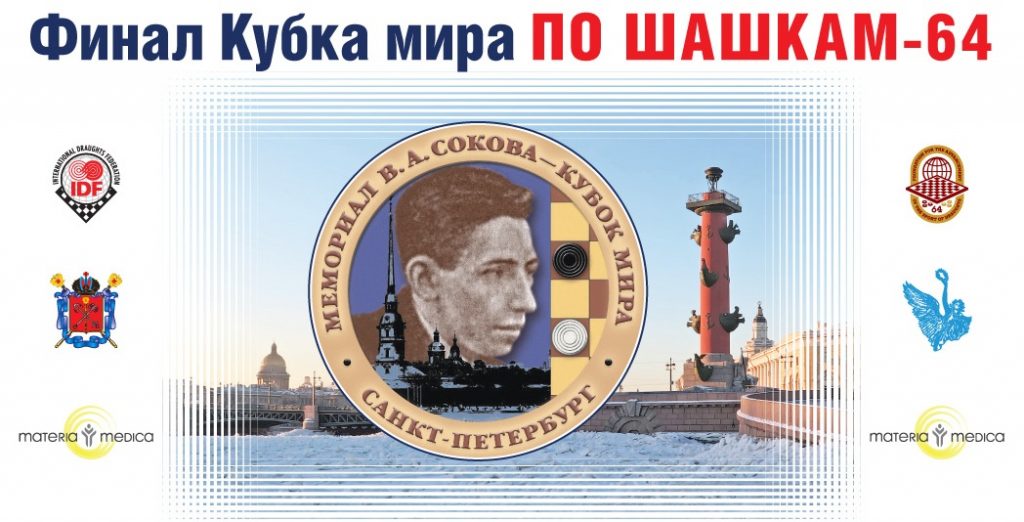 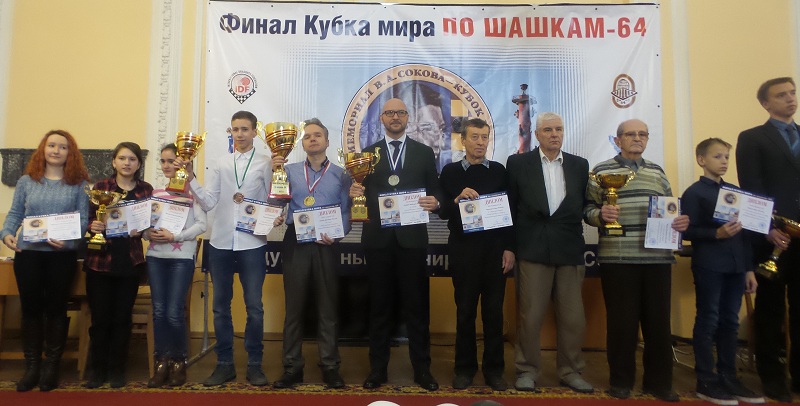 09-12-2017 The World Cup Final 2017 in draughts-64 is completed. In the last round, Dmitry Tsinman and Vladimir Skrabov completed their games in a draw, and the young master of sports Nikita Volkov sensationally won against experienced grandmaster Arunas Norvaishas. These three players scored 13 points and the coefficient placed them in the following order: Dmitry Tsinman took 1st place, Vladimir Skrabov took 2nd place, Nikita Volkov became the third. 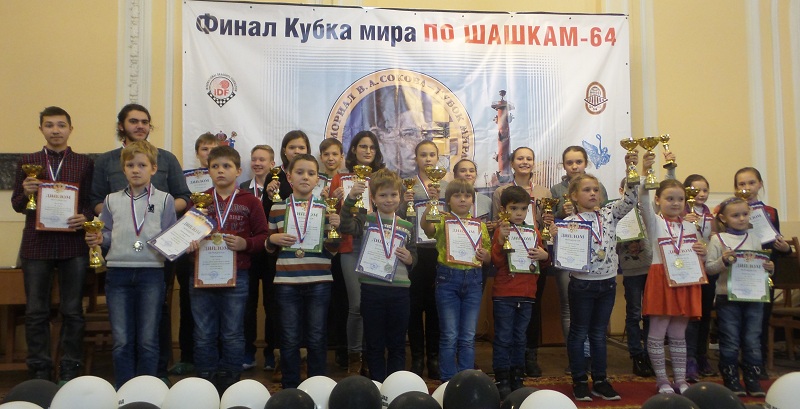 08-12-2017 Today, the eighth round of the classic program was held, and at 15.30 the participants of the competition went for a sightseeing bus tour around St. Petersburg.

After eight rounds of the World Cup Final Dmitry Tsinman and Vladimir Skrabov are in the lead. They have 12 points each. 7 players have 11 points: Arunas Norvaishas, Evgeny Kondrachenko, Sergei Belosheev, Ivan Tokusarov, Nikita Volkov, Andrey Valyuk and Olga Balukova, who made a draw in rounds 7 and 8 in games with international grandmasters Arunas Norvaishas and Ivan Tokusarov. 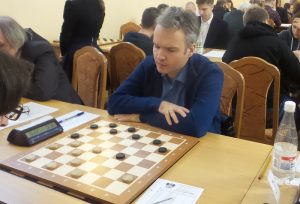 06-12-2017 After six rounds of the classic program of the World Cup Final with the result of 10 points, International grandmaster Dmitry Tsinman is in the lead. 6 participants have 9 points: Arunas Norvayshas, Sergei Susidko, Evgeny Kondrachenko, Vladimir Skrabov, Ivan Tokusarov and Olga Balukova, the young women’s 2017 champion of Russia among women.

These players will fight for the medals of the World Cup Finals in the remaining three rounds. 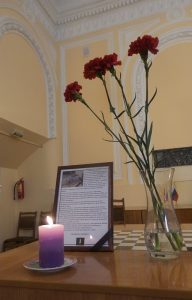 05-12-2017 Tonight, after the end of the game round, took place an evening of memory of a young grandmaster from St. Petersburg Dmitry Abaranov, who died prematurely after a serious illness in November 2017. Today he would be 25 years old. Dmitry Abaranov from a young age successfully played at the draughts competition of the highest level and was for many participants of the World Cup a good friend, a rival who has the reputation of an acute and uncompromising player.

Participants of the World Cup, along with relatives and friends of Dmitry Abaranov recalled the events connected with him from draughts life. It was decided to hold an annual tournament in St. Petersburg dedicated to the memory of the young grandmaster, leader of the Petersburg draughts of recent years. 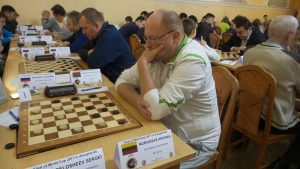 04-12-2017 After three rounds international grandmasters Arunas Norvaishas and Dmitry Tsinman are in the lead in the classic program of World Cup Final. Arunas Norvaishas scored an important victory in the third round over the multiple world champion, the winner of the Blitz program Sergei Belosheev. 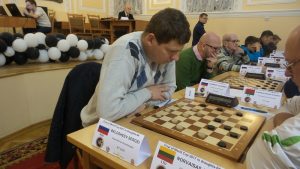 03-12-2017  In Blitz program of the World Cup Final, the international grandmasters are ahead: Sergei Belosheev became the winner with a score of 16 points, Vladimir Skrabov took second place, Ivan Tokusarov is on the third place. 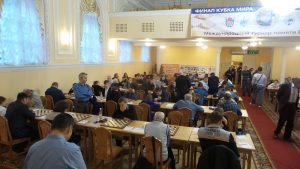 Competitions in both World Cup programs are held on a Swiss system in 9 rounds, according to the system of micro matches from 2 games with draws moves and positions (745 positions). Time control is 45 ‘+ 10″ in classic program and 3’+ 2″ in Bllitz.

In the youth tournament, the competitions are held according to the Swiss system in 8 rounds, according to the system of micro matches from 2 games in the classic Russian draughts with separate set-offs for boys and girls in the age groups 2001-2003, 2004-2006, 2007-2008, 2009 and younger. Time control is 45′ for each participant until the end of the game. Team standing is determined in the youth competitions. The composition of teams is 3 boys and 1 girl. 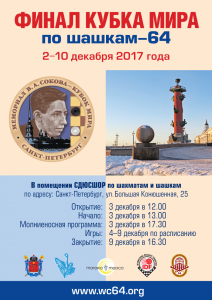 01-12-2017 December 3, in St. Petersburg, in the premises of the SDYUSSHOR for chess and draughts (famous Chigorin club), will start the Final of the World Cup 2017 in draughts-64. Competitions are held with the support of the Committee for Physical Culture and Sports of St. Petersburg and the Foundation for the Promotion of Draughts Sports “Russian Draughts”.

The sponsor of the final stage of the World Cup is one of the leading Russian pharmaceutical companies “NPF Materia Medica Holding”.

The final stage of the World Cup, which summarizes the year and awards the winners of the all World Cup 2017 is traditionally held in December in St. Petersburg.

Why the final stage is held in St. Petersburg?

In St. Petersburg for many years, there has been a traditional international tournament in memory of the outstanding Leningrad player, champion of the USSR Vasily Sokov, who died in 1944 in battles near Narva. This tournament, as well as the international tournament “White Nights”, is the visiting card of the draughts St. Petersburg and regularly gathers the strongest players from different countries. Since 2010, the tournament has received the status of the World Cup Final.

Simultaneously with the final stage of the World Cup, there will be All-Russian competitions among boys and girls in 4 age groups: up to 17, 14, 11 and 9 years.

This is also a long tradition of draughts St. Petersburg, when very young talented children play near the legends of draughts sport and learn to play on the games of the strongest players of the world.

Vasily Sokov, champion of the USSR 1938-41′s, was born December 26, 1912 in Yaroslavl region, died March 3, 1944 in the Battle of Narva. Most of his life he lived in Leningrad. Vasily Sokov was a very strong player, magician of draughts, the founder of the progressive Soviet school of draughts art, consummate theorist and innovator, humble and helpful people – so he will remain forever in the hearts of lovers of our folk game.

International draughts tournament memory Vasily Sokov for many years are held in St. Petersburg as a tribute to the memory of a champion.

This year in December marks the 105th anniversary of the birth of the legendary draughts player. 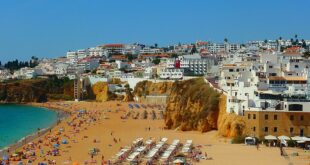